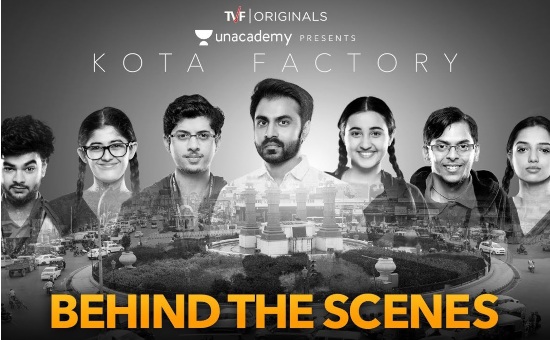 The story revolves around the wedding planning company owned by Karan and Tara. This web series is all about homosexuality, dowry, extra-marital affairs, sex scandals and much more. Zoya Akhtar and Reema kagti are the creators of this web series.

The first season of this show contains 5 episodes and was premiere online and later on YouTube in 2021. The web series depicts trials and tribulations of unlikely young entrepreneurs who quit their jobs so that they may pursue their startup ventures.

TVF Pitchers web series is a story of young men who quit their well-paid jobs to run a Startup. the show makes not that you have to make on the way for something to pick up in the cut-throat market. For anybody who wants to plunge into his ideas into a business should definitely go for this web series.

College Romance us a story of tree BFFs Karan, Trippy, and Naira who look for love, laughs and some lifelong memories during college life together. College Romance reminds you of your own days in college. It is a popular web series among youth generations.

The story of this web series revolves around the three Karan, Trippy, and Naira who are seen tackling aspects of college life, from lectures to canteen visits to fancy bikes, bunking, and much more.

Kabir Singh, a brilliant but unconventional Crime Branch officer, assembles the missing pieces  of unrelated deaths that leads him to an unlikely suspect- affable Danny.  It is an Amazon Prime video’s second Indian original series after 2017’S inside edge.

This web series is based on the aftermath of the horrific 2012 Delhi Nirbhaya gang-rape case.  This web series has won major critical acclaim since it aired the first season and the second season also has been announced. The web series depicts 2012 notorious Delhi gang rape, which is widely known as the Nirbhaya case.

A 23-year-old girl with his male friends was beaten up badly and brutally assaulted in a running bus near Munirka in New Delhi while she was going home after watching a movie. The girl was gang-raped and assaulted with an iron rod following which the pair was thrown naked and injured on the road after which the culprits tried to Run them over with the bus.

The family man is an edgy action-drama series which tells the story of an Intelligence Officer, Shrikant Tiwari, who is strongly hard to maintain a work-life balance. Shrikant Tiwari, the protagonist, is a middle-class family man who works for a special cell of the National Investigation Agency.

this web series is a Spy and detective thriller where the audience sees an ordinary man struggling between the See-Saw of family and his National duty. The storyline of this web series is inspired by true events. Needless to say, Manoj Bajpaaye’s effortlessly excellent performance keeps the audience glued to the screen for as long as the series lasts.

This web series revolves around Kaleen Bhaiya, a don in the lawless city of Mirzapur. Mirzapur is a shockingly violent Revenge drama super web series on Amazon Prime. This web series is all about drug combinations, firearms lawlessness, guns, Mafia, and mayhem. It is an Indian crime thriller web show.

The series is majorly based in Mirzapur with some scenes being shot in Gazipur, Jaunpur, Azamgarh Lucknow, and Gorakhpur. Mirzapur is more than A Tale of guns and curses because of its unexpected plot twists and flashed out characters.

This web series helps India to become a global force in the web series space. When its first season aired, Sacred Games became a subject of mems. The show depicts action, crime, and drama in a powerful way.

The storyline of this web series primarily revolves around a Mumbai police officer and a Gangster, who even thinks him to be the God. We find ourselves traveling through a series of mystery, comedy, drama, deeper corruption in law, and lots of fightings and actions that make it worth watching. The web series is a part of a game that keeps us glued to the end of each episode with lots of excitement.

It is a web series that just watching for the people of every generation. Season 2 may not have been as engrossing so it is yet to be known if the show will come back for a 3rd season.

Permanent roommates are the story of a long-distance relationship turning into live-in- relationship presenting the challenges of life- in, long-distance and marriage. The show indulges its characters as much as it celebrates them. The perfect blend of some impeccable drama and theme-centered comedy makes it quite popular among the youth.

Over the years, Kota is best known for the reputation of mass-producing IIT-JEE graduates. Kota factory is the first black and white Indian web series presenting the real story of the infamous coaching industry of Kota and the rate race to clear engineering examinations.

The web series revolves around School,  friendships,  the fear of entrance examination, and the problems of day to day lives of IIT JEE aspirants.